It took me a while to find a way to watch Canelo Alvarez vs. Daniel Jacobs, but my patience was rewarded as I got to watch a pretty high level fight with two world champions vying for middleweight supremacy. The story was mostly Daniel Jacobs trying to find a way to get through this brick wall known as Saul “Canelo” Alvarez. The solutions he tried to employ to do that were interesting, but to no avail.

Canelo Alvarez is now the undisputed and unified world middleweight champion of boxing, and there’s nothing everyone else can do about it other than pin him with another positive PED test. Throughout the build-up to this fight, he was certainly the favorite, and he fought like it through most of those 12 rounds.

There are now talks about him fighting Demetrius Andrade, Errol Spence Jr. (going up in weight), and a third fight with Gennady Golovkin—also a former opponent of Jacobs who just left trainer Abel Sanchez recently. There’s also Jermall Charlo, who is the current WBC interim middleweight champion.

Let’s look at his performance against Danny Jacobs, who certainly is no slouch but was certainly challenged in finding ways to beat him. Both men are the toughest men in the middleweight division right now, so not even ballistic missiles can put them on their asses.

There’s no other way to talk about Canelo Alvarez vs. Daniel Jacobs than looking at it from Daniel Jacobs’ perspective. He gave up $1 million of his guaranteed purse just to not have to cut more weight, most likely deciding that it may give him a better chance at beating Canelo.

This fight was about getting more offense in as there’s little to no likelihood of a knockout with both men being known for their chin. I found Jacobs’ approach at the start interesting, moving around and working off the jab. In turn, Canelo worked his left as well, looking to land a good left hook to rock his opponent.

Jacobs’ job was to stay away from the ropes and keep the fight in the middle of the ring. He also had to mix it up since Canelo was so good at countering from his upper body movement. Whenever he got too close, Jacobs would tie up to not risk exchanging with him in the pocket.

But by the sixth round, he did something different—switching to southpaw. Whenever he went to the right lead, he fought a scrappier fight. He started to throw more shots and score, so it looked like Canelo got thrown into a loop. Jacobs would then go back and forth between orthodox and southpaw to break up his opponent’s rhythm.

However, Canelo adapted and got what he wanted—his opponent standing right in front of him. Jacobs got some good shots in, but stood mostly still and no longer circling the ring as much. Canelo was able to use his movement to make him miss the whole night. 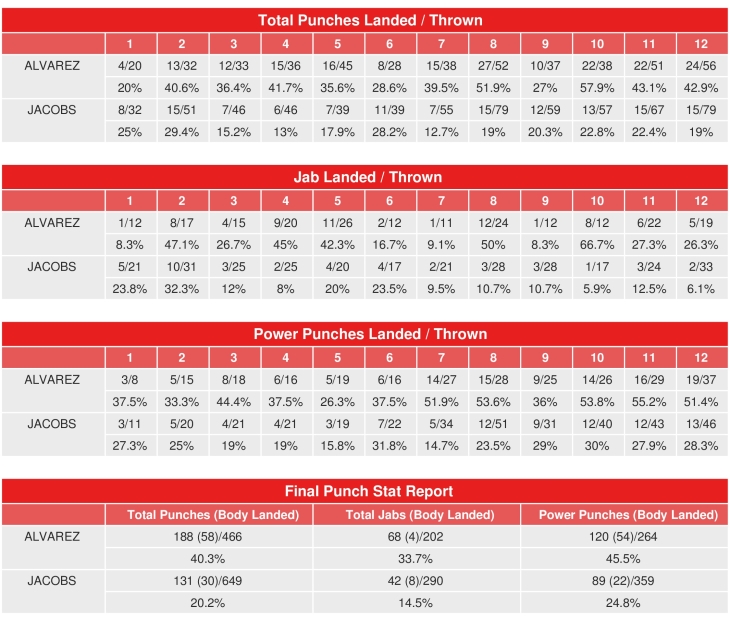 According to the Compubox, the only rounds Jacobs hit more punches than Canelo were the first, second, sixth, and maybe the eighth, but not by significant margins.

Beating Canelo means hitting a lot more than he does, and that’s not happening anytime soon unless he fights someone who’s just as good at hitting or more. Golovkin tried, and he arguably accomplished that in their first fight, but he got screwed by the judges.

A little bit more cleaning up the middleweight division and you can truly consider Canelo as this era’s greatest, Clenbuterol or not. Unless a positive drug test can be conclusively pinned on him, his legacy in the division is secure.

Meanwhile, Daniel Jacobs has now lost to both GGG and Canelo. Does he stay a gatekeeper in middleweight or go up to super middleweight? Either way, he’s still one of the top contenders at 160.